There is so, so much to do in the hobby of collecting cards.

You can chase cards from your favorite teams, your favorite players, try to chase the big hits, or even try something called chasing a rainbow. And no, it has nothing to do with Skittles.

What's a rainbow you may ask? It's a run of a singular card with multiple parallels. In order to complete a rainbow, you must have the entire set of that singular card all the way to the 1/1. Some card rainbows are easier than others as they all have different sizes. Some.may have three, others may have 15 or some may even have 26.

In my 25+ years of collecting, I have put together a couple of rainbows. They are not easy to do and can become very costly to do so. My most impressive one is the 2018 Select Rodney Hampton which technically had two 1/1's and those were also an autographed series. My only other rainbow was a 2012 Topps Chrome Rueben Randle.

Out of nowhere, I had accidentally acquired a couple of the 2019 Panini Prizm Eli Manning colored pieces and then decided to add a few more and then maybe a few more after that.

How far will I go? Not sure. There are 25 to chase and with it being a star player, the cost of landing those low numbered cards would most likely price me out.

So for now, I figured I would add whatever I could and see where that takes me. 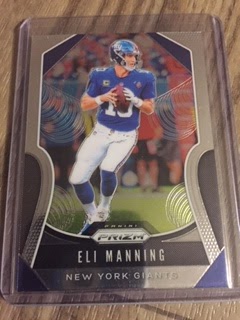 Base Card. You gotta start there. 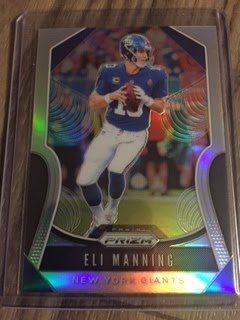 Silver Prizm. Not numbered but seem to be a little hard to come by with only one per blaster box at least. 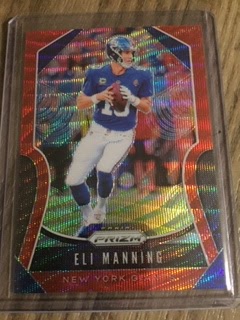 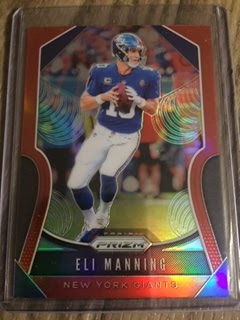 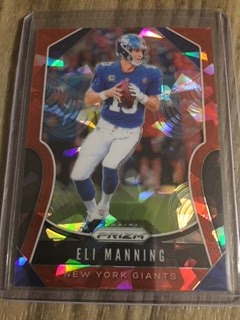 Red Ice. These are beautiful! 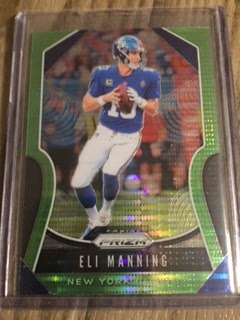 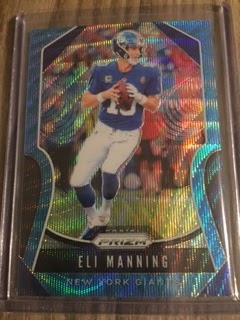 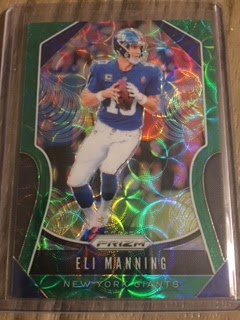 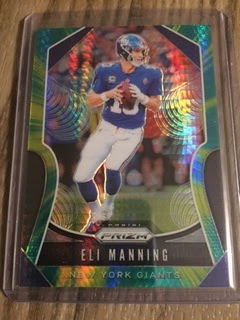 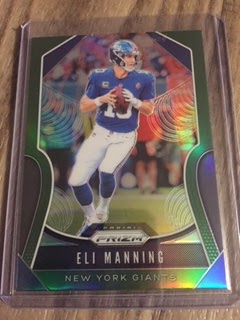 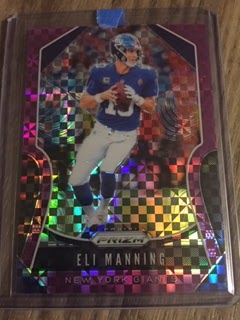 Purple Power /49. What I hear is puppy power! 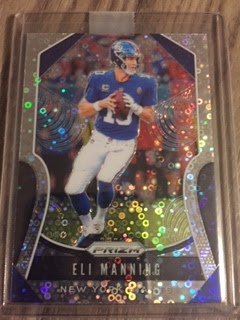 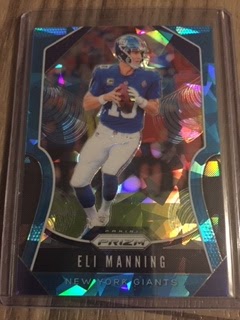 Can't decide if I like the Blue Ice or Red Ice more. Though the Blue matches Giants blue 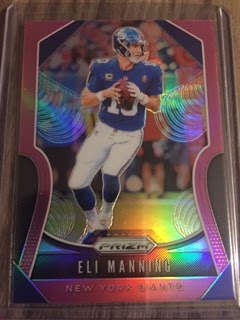 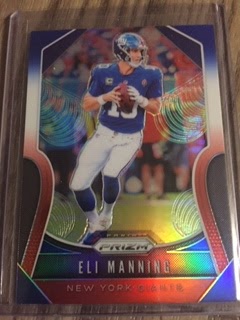 Proud To Be American Red, White and Blue! 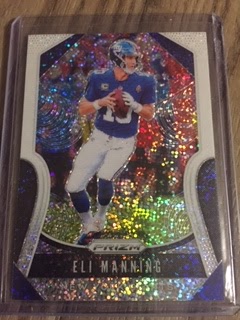 White Sparkle. These are not numbered, but are limited to just 20 copies each. By far my lowest in this chase I have acquired 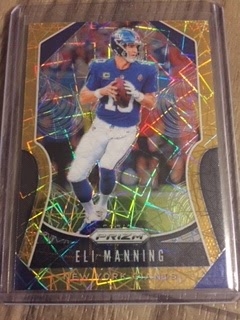 Lazer. All I can picture is Dr.Evil using quotation fingers with the name in Panini meetings on what to call this one. 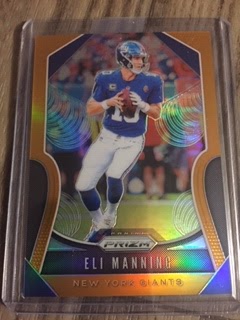 In his second season with the Giants, Kerry Collins put up good numbers in the 2000 season leading the Giants to a 12-4 record and a trip to the Super Bowl to play against the Ravens.

However, Giants actually going to the Super Bowl vs actually playing in it were two different things.

Collins put up by far the worst numbers of his career and the third worst Super Bowl rating for a QB as the Ravens defense dominated and shut him down to completing only 15 of 39 passes for 112 yards and four interceptions. The Giants played awful and lost 34-7.

To commemorate the Super Bowl, Upper Deck created a 21 card set featuring both of the teams featured in the game. A set I didn't know existed til recently when I stumbled up on the Collins. 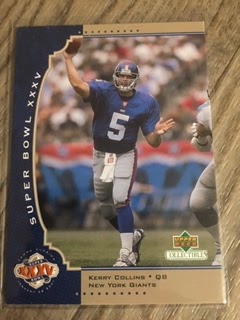 Not too shabby of a design. 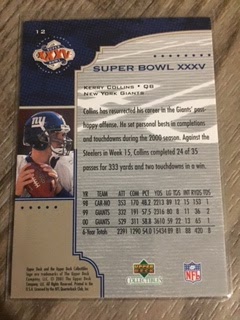 Card back shows Collins as card 12 in the boxed set

The Super Bowl play really hung over Collins who lost a record 23 fumbles in 2001 with the Giants.
Posted by Matt at 6:36 AM No comments:

It's In The Trash

All across Twitter I have seen some collectors brag about recent one-cent pack grabs from Dollar Tree while some others claim their store didn't have the packs or that their store wasn't allowed to sell them.

It's been said that Dollar Tree is no longer carrying football cards as they had been discontinued across the country. I am not sure if this is just for the 2019 packs or all in general.

My local Dollar Tree has been hit or miss with carrying cards or even Panini stickers but I wanted to see what they had anyways just in case mine was one of the lucky ones who was selling the one-cent packs. Only problem, I couldn't make it there due to a busy schedule.

I didn't want to miss out on such a great deal if my store was participating, so I asked myself -"self, how I am I going to pull this off?"- cause there is still a chance that a collector could exist in my area and swooped them all up.

That's when my mother-in-law came to mind. She is long retired and takes plenty of trips to the mall where the Dollar Tree exists. My hair and ears curled like The Grinch in the cartoon as I called her hoping to hear a yes, "any chance your going to the mall today? I was wondering if you wanted to swing into Dollar Tree while you are there? I heard there could be one-cent packs of football cards!"

The plan was in place and I felt like a little kid with the cupcake with the most frosting at a birthday party. All I had to do was wait by my phone hoping she discovered some.

After about an hour, the phone rang and I knew it was her. I said a little prayer and I answered the phone to the disappointing but surprising news.

My heart sunk. The thought of possible Daniel Jones rookie cards and yellow parallels exclusive to those packs being tossed into the dumpster like trash.


My next thought was, should I ask her to be one of those cartoon animals that is diving for it's last bite of food or maybe even be like my grandmother when I was little and she would dumpster dive for Keebler cookies when the company would toss away the outdated boxes.

But, being the nice son-in-law I am, I didn't have her dive into the dumpster even though the visual thought played over and over in my mind. Instead I thanked her for trying. I just hope the the words of "throw them out" didn't actually mean literally throw them out.

This years Dollar Tree packs were actually worth the price of admission in my opinion. Years past, you would only get five base cards which I guess makes sense for $1. This year Panini upped their game and you can find rookies and even exclusive yellow parallels only to Dollar Tree. These yellow parallels actually have some value to them as well if you can hit the right players. With one yellow per pack and only five cards per pack for products that have bigger 200 to 300 card sets the odds you hit a good one are 1:200 to 1:300. Which is why the value is there.

Before all of this penny pack nonsense, I had actually busted some $1 basketball packs of Hoops and Absolute from there and felt more impressed by those then I did some recently hobby and retail breaks.

Here were my results from those breaks, 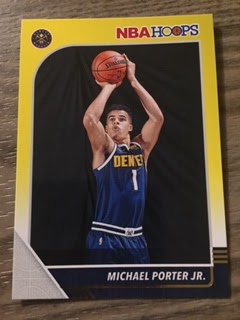 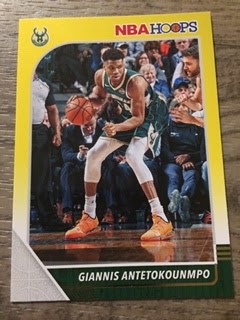 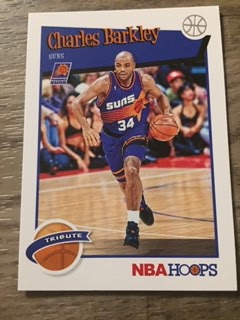 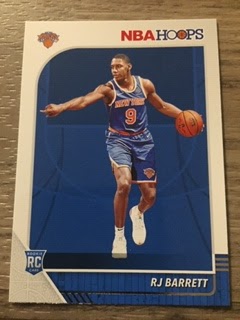 This was my first Barrett rookie 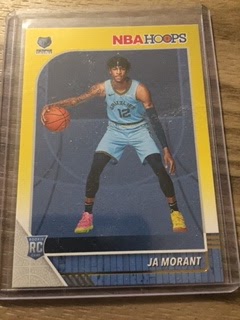 JA MORANT. This isn't an easy pull and these have sold for upwards $30-$40 for a Dollar Tree pack! 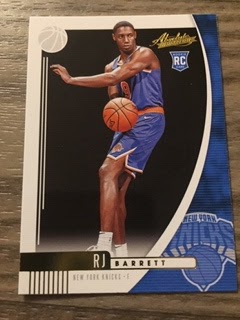 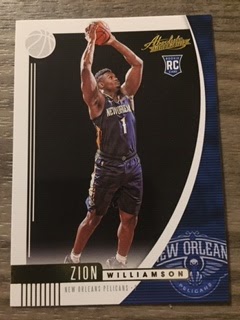 The man, the myth, the legend Zion 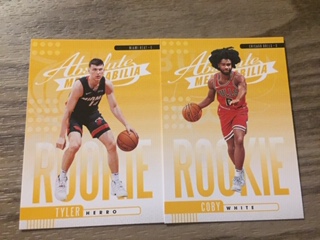 And a couple more decent rookie yellow pulls from Absolute.

Also with these I thought about chasing down the base sets as well. These packs breaks did leave me wanting more and according to my mother-in-law in that same phone call they still had packs of these left there.

Unlike the poor, poor football cards. **playing sad music on a tiny violin**

Even with football season done, I still would have given a dollar a pack for them. I just hope it was just a discontinue of the 2019 packs and we will see 2020 ones when the times comes.

I really hope they keep bringing in basketball packs however, as I will keep throwing my dolla dolla bills at y'all.
Posted by Matt at 6:42 AM 3 comments:

Email ThisBlogThis!Share to TwitterShare to FacebookShare to Pinterest
Labels: 2019, 2020. Zion Williamson, Absolute Memorabilia, Hoops, Opinion Stories, RJ Barrett
Home
Subscribe to: Posts (Atom)
I can do all things through Christ Who strengthens me.
Philippians 4:13

Matt
This is a place where I will share my collecting journey while leaving a positive mark on your day. Also, I am not that fat.